In this year, STAR completes the transformation (begun in 1983 with the throw-Mark-Alfred-out controversy) into the inclusive, active Club it has become today (when this was written in the 1990s that is!). The year begins with the Club meeting at its traditional location, the Belle Isle Library. Larry Jones continues as President; Tammy Bothel is Vice-President; Tamara Baker is Secretary. Mike Hodge is Treasurer.

Most members of STAR attend the wedding of Mike and Mary Powell on March 24.

Another chapter in the twisting and turning drama of STAR OKC occurs when members try to attend the May meeting. Tamara Baker, Mark Alfred, and Tammy Bothel show up at the Belle Isle Library to find it locked up, closed for repairs. Zann and Larry Jones arrive soon after. Puzzle¬ment is expressed at the President’s not ar¬ranging for an alternate meeting place, since this one is obviously unavailable. Tempers in the Jones family flare, and they rapidly depart, never to return again to STAR OKC — until Larry visits once or twice in the early 1990s. Here’s the complete Min¬utes for this turn-the-corner STAR event: “May 12. Members present: Tammy Bothel, Mark Alfred [and Tamara Baker, who writes these Minutes]. A WASTE OF PAPER. Lib. closed, Zann & Larry Jones’s last ‘meeting’ — in parking lot!”

Another step to the present STAR OKC is taken at the July meeting. Tamara Baker’s notes read, “Nosfa style newsletter proposed by M.H.” — meaning Mike Hodge. This is further kicked around at the August meeting, and ...

The September, 1984 meeting sees “the first issue of the new Galactic Gazette. I, being Tamara Baker, Vice-Pres. of STAR, am writing this to inform you of Club happenings. ...”

This cannot be emphasized enough. This September issue of the Galactic Gazette is the first in an UNBROKEN LINE down to our own GG of today. And, it’s thanks to Tamara Baker and Mike Hodge for this, the format continued even today. So, yea, broth¬ers, don’t forget the debt we owe to this first issue of the present GG!

The October meeting is that one of which present STAR members have heard Club Historian Mark Alfred reminisce about, the time “when STAR OKC had only four members.” And they all were there: Mike Hodge, Tamara Baker, Mark Alfred, and Denise Reedy. A four-member Club isn’t much good, so the decision is made to blow the Club’s treasury of $40 or so on Club flyers, and “blanket the city.” The flyer’s text: “STAR OKC — STAR TREK / Science Fiction Fan Club. In our 12th year! OKC’s oldest club for sci-ence-fiction fans.” Then meeting information. Then, “Dues are $3 a year” — probably a pretty good attention-getter.

The October GG contains a letter from the New Prez, Tamara Baker: “Yes, another new president. As you all know Larry Jones our former President re¬signed quite some time ago and left his then vice-president, Tammy Bothel, in charge. ... Yep, you guessed it. Tammy Bothel has become an ex-President.” Mark Alfred becomes Vice-President.

Another feature of the October GG is a 1¼ page proposed Constitution for STAR OKC. Once again, here we see the foundation of the present Club. STAR is “a science-fiction, fantasy, and science-fact fandom organization ... open to all people who feel it within themselves to attend at least 6 meetings a year and to pay the sum of three dollars a year as membership dues.” Note the language about being open to all, and the broad range of interests. This happened because the rank-and-file decided to make the Club this way, and not have it be a personal or political “clique” group. An addition to the section on impeachment of officers makes this clear: “General members cannot be impeached and their membership cannot be revoked. They can, however, be advised as to wrongdoings where the Club is concerned in the hope they will rem¬edy the situation by themselves.”

A further decision is taken at the October meeting to continue the present slate of officers through the next year. Pretty silly to elect three officers from among four or five members!

The November meeting sees a slight response to October’s flyer distribution, in the form of two visi¬tors: a fellow named Marq Pratt, and a gal named Casey Hamilton, who is later to fill many offices in STAR and SoonerCon. The November GG reports that the Club’s funds are down to $7.00, what with paying for the post-office box and the 1,000 flyers at Kinko’s.

A time capsule: The December GG has a cartoon cover by Mark Alfred depicting Santa in a space sled drawn by eight reindeer, each in its own space pod. Prez Tamara’s “Voice from Above” reports on the Halloween Party, the unanimous ratification of the new Constitution, and the possibility of STAR having a booth at the Spring 1985 Mediæval Fair in Norman. V-P Mark’s page is a column on “STAR TREK and STAR WARS’ Appeal.” Treasurer Mike’s “Voice from Beneath the Below” reports he has ordered 100 STAR OKC pens and that “we still have seven (7) dollars in our swelling account.” If anyone has some¬thing for the GG, they should get it copied 20 times and bring it to the meeting. Then ensues a page of Mike’s “Continuing Story of Martin” and a list of SF items wanted to buy by a guy in Florida.
Posted by Mark Alfred at 5:10 PM No comments: 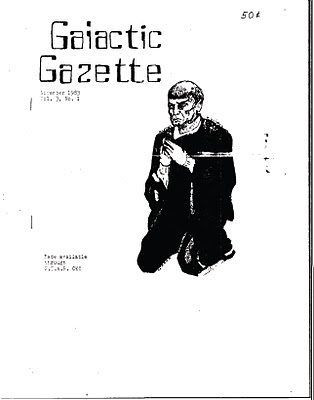 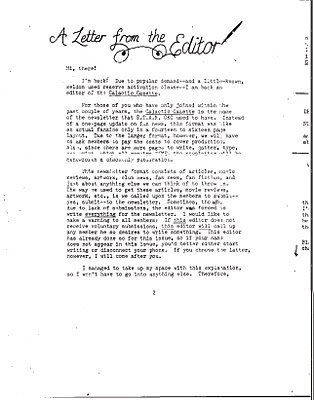 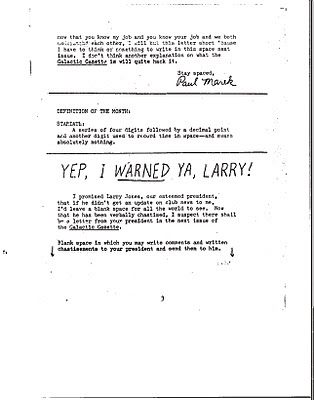 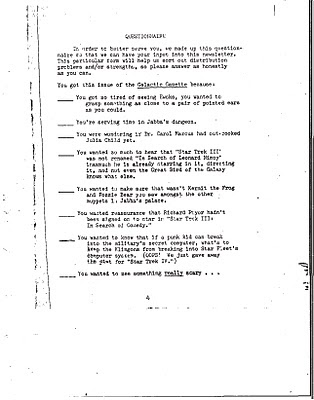 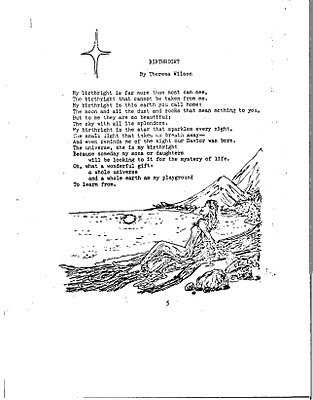 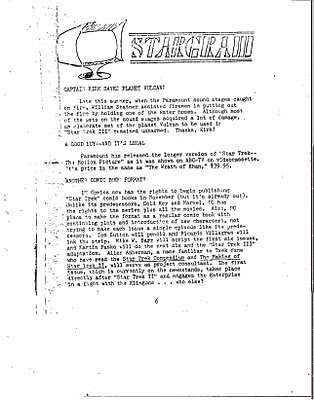 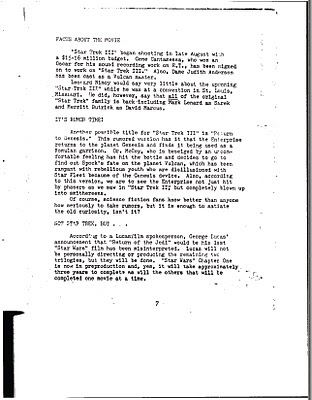 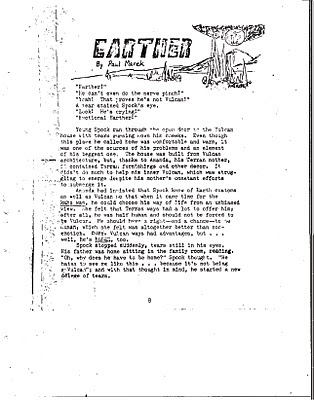 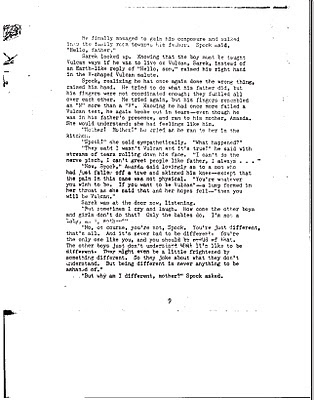 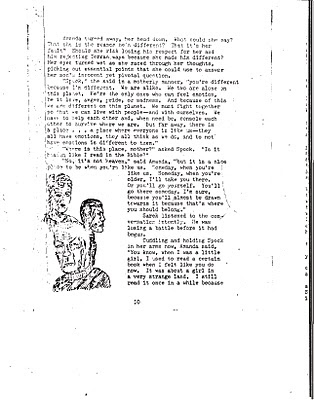 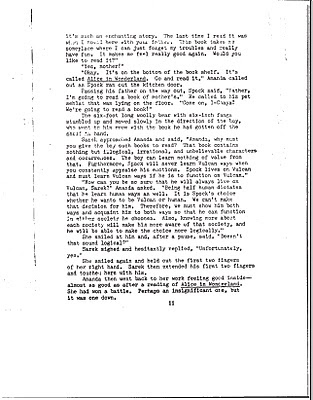 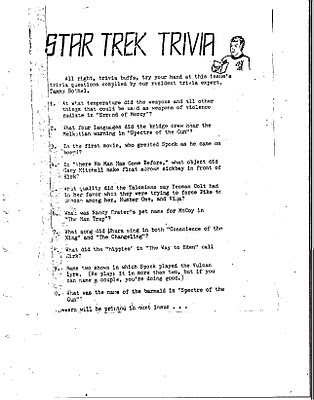 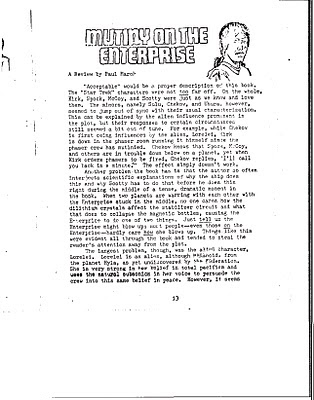 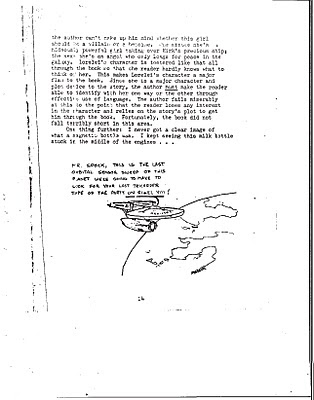 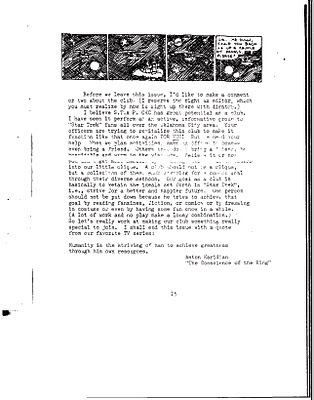 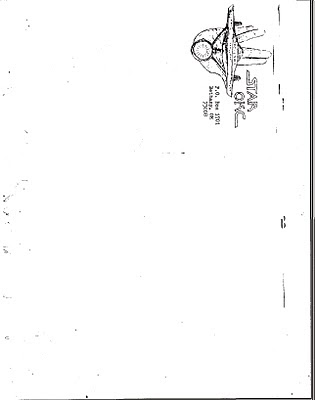 Posted by Mark Alfred at 9:39 AM No comments:

In August, new President Larry Jones, claiming to have the backing of other Club members, sends a six-page letter to Mark Alfred, who now finds himself in the middle of a controversy. It is not overly dramatic to say that the resolution of this conflict changed and reshaped STAR OKC from now until the present day. Here’s a synopsis of that letter, with actual quotations as appropriate.


The Club needs revival and rededication. Among causes for “the low morale of the Club” are: 1) Leadership failures; 2) “Overly wide variation in age, tastes, and family ties”; 3) “Deterioration of the highly moral foundation we have always enjoyed”; 4) “Too little emphasis on STAR TREK”; 5) “Incompatibility of the members on an individual basis”; 6) “Too great an emphasis on the needs of the individual over the needs of the group. ... We, then, need to re-commit ourselves to the needs of only our primary group, and do our recruitment from the same. We see this group as being single persons between 16-23.”

But the greatest problem STAR OKC has, President Jones writes, is a person — the recipient of the letter, Mark Alfred. “Most members have openly expressed a desire for the officers to ask you to leave. ... Each of us has suffered insults and discourtesies at your hands, and you have attack the worth and character of us all. Your complaints and disagreements are incessant. Your humor is indecent and offen¬sive. ...” Another irritant is that Mark doesn’t hide his accumulation of SF videos, including some he has traded for — not bought or sold — that are of bootlegged (unreleased-to-video) movies. “Your boasting about your unlawful and unChristian videotape collection has shamed us.” Still, President Jones says he won’t kick Mark out just yet. “You must change, Mark, immediately. ... I must bend to the members’ wishes unless the problem is solved.” So closes the letter.

While acknowledging a propensity for hasty speech and a bent for a sardonic sense of humor, Mark is stunned and hurt. He certainly doesn’t remember insulting the worth or charac-ter of anyone. And if they don’t like his bootlegged Empire Strikes Back, then they don’t have to watch it if he plays it. Feeling the pangs of rejection, Mark doesn’t attend the September or October meetings. He goes to the November meeting, attended by only three others: Mike Hodge, Tamara Baker (later Hodge), and De¬nise Reedy. Basically, they tell Mark that they heard about “the letter” and think it’s an under¬handed thing to do, and emphasize that Mark is welcome in the Club. It transpires that members of the “anti-Mark” wing of the Club take his being re-welcomed into STAR as an affront to them, and to “their” Club. How dare these lowly members go against their betters’ wishes to boot an unwieldy soul from the Club!? 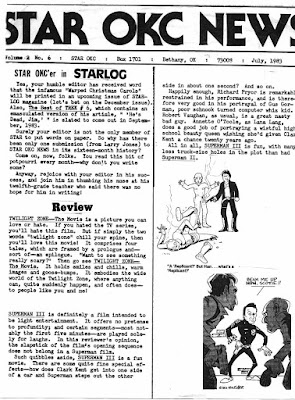 November also brings the new and improved Galactic Gazette, a 16-page mimeoed zine by edited by Paul Marek. “Instead of a one-page update on fan news,” writes Paul, referring to the now-defunct STAR OKC News, “this format is like an actual fanzine only in a fourteen-to-sixteen page format.” In his closing remarks, Paul also weighs in on the side of inclusiveness in the Club and takes a slam at the mindset of trying to run STAR OKC as one’s own private domain: “A club should not be a clique, but a collection of fans, each striving for a common goal through their diverse methods. ... One person should not be put down.” This is the only issue of this version of the GG.
Posted by Mark Alfred at 6:55 AM No comments: