Volume 3, for July, has a missive from President Tammy Bothel; excerpts follow: “... Many complaints about the policies of STAR OKC have been raised. ... The Club’s policy on drinking was voted in by the Club’s member¬ship. ... No alcoholic beverage of any kind is al¬lowed at any official Club function. ... The large fraction of Club membership is made up of mi¬nors. One of these is me. ... Any complaints are never brought to me or, for that matter, brought before a Club meeting. They are groused about to non-officers or just left to simmer until it threat¬ens the very health of the Club. I do not like this, and it cannot continue. ... Intelligent considera-tion, not to mention simple courtesy, requires complaints to be brought to light to be handled and answered by the Club officers you elected to do just that.”


[SNIDE EDITORIAL ASIDE: Boy, I am glad that no more of that grousing, grumbling be¬havior happens — now that most Club members are all grown up!]

Also sometime in the summer of 1982, “Southside Comics & Science Fiction presents: N.O.S.F.A.RATU.” (“Southside Comics” was an earlier name for what is now Planet Comics.) This one-day con includes a panel on Upcoming Conventions featuring such STAR names as J.R. Daniels, Mike Hodge, and David Means.

At the October meeting, an auction of SF-related items is held, with a little bit of the pro-ceeds going to the Club; the rest to the individual members who sell the stuff. 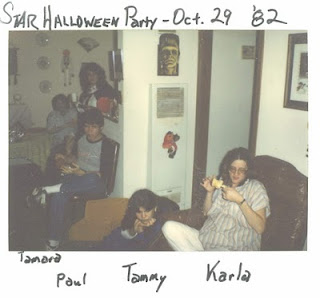 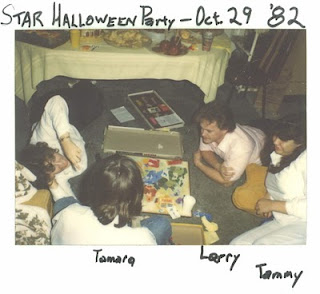 The December issue, now called STAR OKC News, announces the 1983 officers (see below), and celebrates the birth on November 16 of Rachel Ann Jarrett to STAR member Karla Jarrett. Was this the first STAR Baby? [STAR Baby: a child born to a member of STAR OKC during the time of that person’s active, dues-paying membership in the Club.]
Posted by Mark Alfred at 2:05 PM No comments: