Regrettably, virtually the only documentation available for this year is the seven volumes of the Club’s newest newsletter, the STAR News.

Each issue, like the l990s GG, is dated the month of the meeting at which it is to be dis-tributed. These 8½-by-11 or 8½-by-14 single-sided one-pagers look pretty amateurish nowadays, but a typewriter and rub-off lettering were the only tools available to the editor. Perhaps this is another case of the product only being as good as the poor putz dumb enough to volunteer.

Volume 1, Number 1 is dated March 1982 and announces, “WELL, HERE WE ARE. ... Your humble and (we hope) honourable servants are: Mark Alfred ... known worldwide for warp-10 mouth and impulse-speed brain. However, he cocks a mean eyebrow. Karen Fullerton ... a diabolical yet angelic per¬sona. ... Mark is Editor and Scapegoat; Karen has volunteered as Assistant Editor and Workhorse. More staff appointments will be announced as they are cornered. ... HERE’S WHAT WE WANT FROM YOU: ... convention reports; book reviews’ movie reviews ... a column authored by YOU ... noble thoughts concerning the place of man in the universe. ... The more we receive, the less we have to concoct ourselves!” 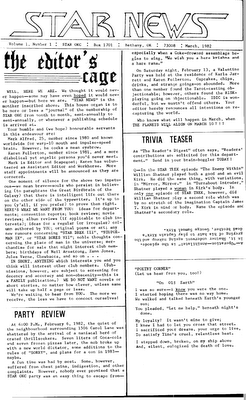 Despite the “we” references, the STAR News is produced solely by the Editor with no assistance and little input.
Posted by Mark Alfred at 2:22 PM No comments:

More from The STAR OKC Chronicles, covering the rest of 1981 ...

March’s “Zannzine” explains that the $800+ earned by BabelCon 1 made “us” (the Club) a taxpayer, so investigations were underway “on perhaps applying for tax-exempt status, or incorporating.” There’s no further information in the records concerning this part of the question, but here’s the end result: BabelCon ’81, though staffed and planned by S.T.A.R. OKC, is run by and for Larry Jones.


Here’s the reasoning: Booking the Lincoln Plaza and Jimmy Doohan involve Big Bucks, a substantial part of that as up-front money. But S.T.A.R. has neither the cash nor the incentive/commitment to raise that cash in the time left before August.

Therefore, Con Chair Larry Jones uses his own funds to get the Con going. This makes the final step “only logical”: Since Larry’s money is at risk — he being personally responsible for all debts — then he should reap the profits (if any) from his risk. He would also send some of those prospective profits towards S.T.A.R., whose members were staffing the Con. Thus, 10 years before ThunderCon, it may be said that BabelCon ’81 is the Club’s first LMC, or “Larry’s Media Con.”

A final note from March is the announcement that Mike Hodge has taken over the role of Publications Officer from Larry Jones, who now has a Con to attend to.

BabelCon ’81 has its share of strikes against it. In 1980 or early 1981, Doohan had suffered a heart attack and cancelled his personal appearance schedule. However, as sum¬mer ’81 arrives, S.T.A.R. has very strong confirmation from Doohan that he will indeed attend the Con (his first appearance since the attack).

Still, as August approaches, some persons — identified by Mike Hodge as Bart Bush and Gary Burleson of the Oklahoma Alliance of Fandom — begin a “whispering campaign” to the effect that Doohan will not appear; that BabelCon ’81 planners know he will not appear; and that the planners are still advertising Doohan falsely, to rake in the bucks. This malicious, deliberate campaign of lies is intentionally undertaken to “sink” BabelCon ’81 before it can even launch. 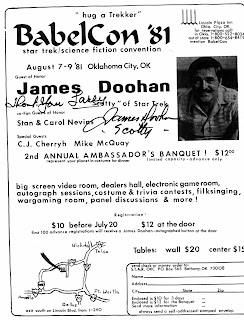 Still, the  flyer for BabelCon ’81 goes out. Blazoned across the top is “hug a Trekker,” and it announces Doohan and co-Fan Guests of Honor Stan & Carol Nevins, as well as Special Guests C.J. Cherryh and Mike McQuay. The 3-day pre-reg price is $10, or $20 at the door. In the Dealers’ Room, wall tables are $20, aisle tables $15. Ah, those were the days!

Besides Chair Larry, other ConCom members include: Co-Vices Larry Nemecek, Paul Marek, Mike Hodge; Art Show Karla Jarrett; Video Rooms David Arnold; and a big list of Consultants and Slave Labor, the gofers and such of the Con.

Well, Doohan arrive in town on Thursday night, and S.T.A.R. takes him out for barbeque and presents him with a blue S.T.A.R. T-shirt, while getting him to sign many members’ T-shirts. (Ask Paul Marek to show you his.)

Snide whispering campaigns aside, the Con goes swimmingly for rank-and-file attendees, who remain in blissful ignorance that the Con never makes a cent, leaving Con Chair Larry Jones with a debt of about $2,000 to repay. Vice-President Tammy Bothel has decided that she and other Club officers will be Doohan’s “honor guard” and walk him from his room to his various scheduled Con appearances. She is very disappointed when Doohan instead chooses his own “escorts,” a couple of husky male types (Mark Alfred and Ed Porter) to guard him from drooling fans in the hotel halls.

An exciting feature of the Saturday night banquet is provided by a female fan who’d al-ready offended Doohan earlier. She pitches a fit when not allowed to sit at Doohan’s table, and he walks out in the middle of the banquet, to be seen the rest of the night only at various room parties, where he steadfastly refuses to reveal any plot secrets from the upcoming STAR TREK II: The Wrath of Khan. However, when autographing a fan’s bagpipe case (yes, a bagpipe case!), he does write, “a somber tone” — referring to Scotty’s playing “Amazing Grace” at Spock’s funeral, as figured out much later.
Posted by Mark Alfred at 8:55 AM No comments:

from the STAR OKC Chronicles -- first part of 1981


At the January meeting are 12 S.T.A.R. members. Yearly dues are $4. A rank system is in place that gives points for recruiting, attending meetings, fundraising, giving rides to func-tions, and so on. Achievement Awards are established for Attendance, Fundraising, Recruit¬ing, Trivia, and Most Valuable Member. However, some members also interject snide remarks concerning how silly they think a Rank System is.

The February meeting sees a Zann¬produced one-page update, the Stardate Review. President Jones discusses the Rank System and offers Club T-shirts for sale. These official S.T.A.R. OKC shirts are light blue and feature Mark Alfred’s design: the Club name in STTMP lettering and the Starfleet insignia across the chest, with the STTMP-style belt buckle at the waist. Also, Zann announces that BabelCon ’81 will be held at the Lincoln Plaza on August 7-9, with Special Guest James “Scotty” Doohan. However, total Club funds, including S.T.A.R. and BabelCon accounts, amount to only $39.49 So what do we do now?

Among the activities used to raise funds for BabelCon ’81 is the sale of Gold C Coupon Books, which at its ending in March has raised all of $65. S.T.A.R. is a long ways from what it needs to hold the big Con being planned.
Posted by Mark Alfred at 9:03 AM No comments: