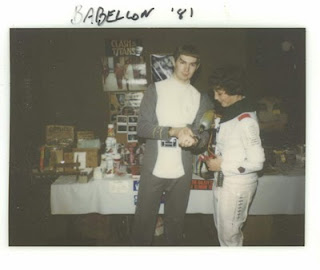 As you can tell by comparing these photos, I shaved off my mustache between Friday and Saturday.

On Friday at BabelCon '81 I shared a Dealer's table with my friend Ed Porter, and wore my blue ST:TMP uniform, visible in the center picture.

On Saturday I wore my "Admiral" ST:TMP costume, and in the evening was in character as "Selik the Vulcan."  Both of these works of sewing art were wrought by my own Wonder Woman, "she who is my wife," Joyce. 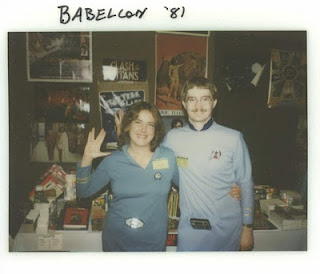 The gal in the top and bottom photos was named "Sunny" (spelling?), and she made a big hit with GOH James Doohan when she proved she could in fact PLAY those bagpipes. Besides being cute.  As you can see, she had her own Trek costume, from Engineering, which also tickled Doohan a bit.
Wife Joyce was also there Saturday evening, and the two of us, along with Sunny, ended up at a room party also attended by Doohan and another BabelCon '81 guest, CJ Cherryh. 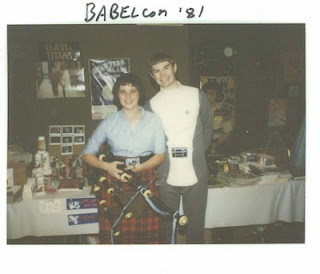 One of the topics of conversation was, of course, the not-yet-released Star Trek II.  And Doohan was very skillful at deflecting questions about it.  He didn't leak a thing that would have given us a further clue than the available publicity.
Except for ONE thing, which only made sense in retrospect.  Doohan was kind enough to autograph Sunny's bagpipes case.  Besides his signature, Doohan wrote, "A sombre tone."
This only made sense to me after seeing STII and witnessing the bagpipes "Amazing Grace" sequence.
Very tricky, Mr Scott!
Posted by Mark Alfred at 7:23 PM No comments: 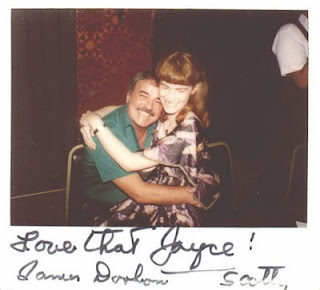 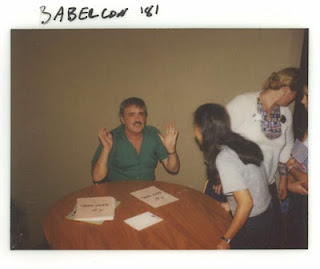 before BabelCon '81, our Guest of Honor, James Doohan, was in town, so S.T.A.R. OKC took him out for dinner.

Most members of S.T.A.R. also took this chance to have Mr D autograph their Club T-shirts.  So it seemed only a fair turnabout to take a Club T-shirt and have all the Club members autograph it, and give it to Doohan!

This T-shirt was designed by yours truly.  It used the ST:TMP font for the club name ("STAR OKC" not "S.T.A.R." you will note) across the chest.  On one side of the chest was a Starfleet symbol, with the belly-button area featuring the Perscan device seen also in ST:TMP.

Also you can tell that Mr Doohan was a fine judge of womanflesh.  That's my wife he's glomming onto, in the top photo.

In our next post, we'll see some of the outfits worn by me and others, at BabelCon '81.  And remind me to tell you about Sunny's bagpipe autograph ... 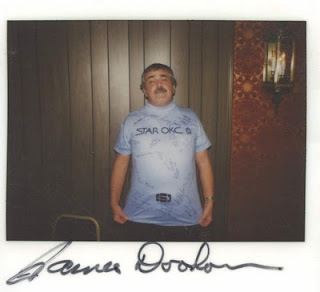 Posted by Mark Alfred at 6:04 PM No comments: 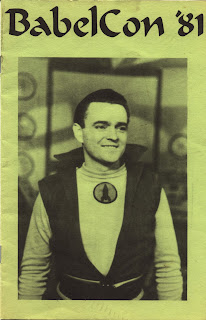 With the success of BabelCon 1 in 1980, plans were laid to hold a bigger con in 1981.  It would be at the big OKC Lincoln Plaza Hotel, and our main guest was to be James Doohan, "Scotty" himself!

Now, this was after ST:TMP had revitalized TREK fandom, and before the hotly awaited-and-debated release of STAR TREK II: The Wrath of Khan.  At least among some of us, the appearance of a STAR TREK movie in ANY form justified and made righteous our ten years "in the wilderness."  We had been rewarded for our fanatical loyalty with a movie.  And a second film was in the wrapping up stages.

Now the rumor mills, which had buzzed about how Leonard Nimoy didn't want to play Spock in the firts film, were now whispering the speculation that Nimoy had agreed to come back for II only if he could kill the character off.

THAT was the big question, would Spock die or not?

Meanwhile, the putting-on of such a big con required lots of staff, organization, and ... MONEY.  My understanding of the situation for BabelCon '81 is, that because S.T.A.R. OKC president Larry Jones personally put up the money for the con (including a mortgage I heard), the con was legally "in his name" so that, along with the risk, he could receive the payoff (of there was one).

This makes perfect sense to me.


Well, the con was set for August 7-9, 1981, with guest Jimmy Doohan, as mentioned above.
And then Doohan had to go and have a heart attack! 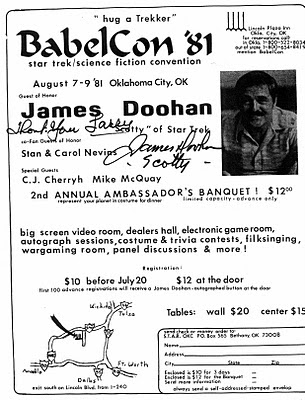 As it turns out, our favorite Engineer had recovered pretty well by the time of the con.  However, in the months in between, some OKC "fans," who (for whatever reason) did not wish BabelCon well, began spreading rumors that not only was Doohan too sick to show, but that the con knew this and was still using Doohan's appearance as a vehicle to sell tickets.
It's this kind of petty, childish infighting that often helps destroy social groups of all kinds, from SF fan clibs to churches.  It's a sad human foible to exult in the misfortunes of others.  The Germans call it Schadenfreude, sorrow-joy.
Here are a flyer for BabelCon '81, and the cover of the Program Book.  As you can see, Doohan DID show up.  How else would he have autographed the flyer with thanks to Larry Jones the Con Chair?
Next time ... when Jimmy Doohan ate BBQ before the con.
Posted by Mark Alfred at 8:42 AM No comments: 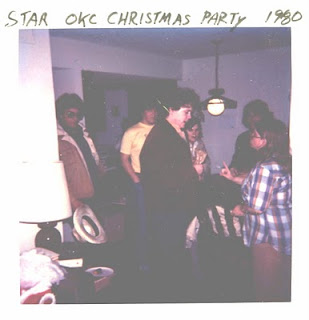 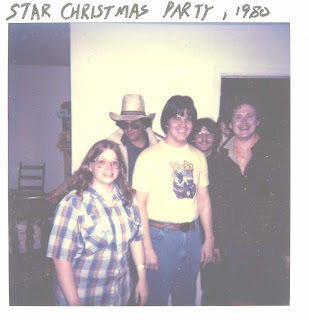 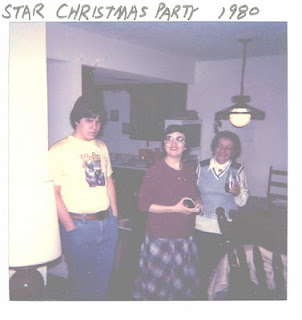 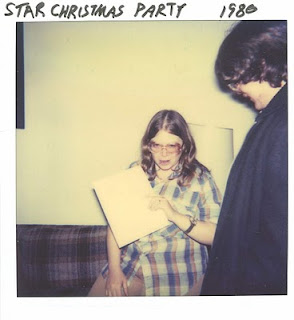 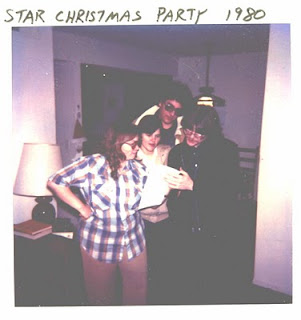 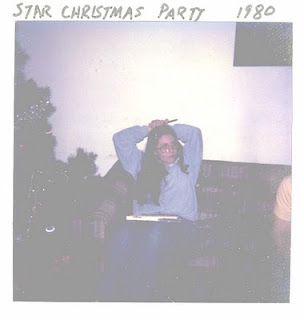 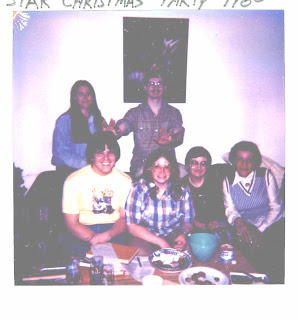 Posted by Mark Alfred at 7:02 PM No comments:

1980
S.T.A.R. OKC begins 1980 with these officers: President Paul Marek; Vice-President David Morgan; Secretary-Treasurer Zann Romero; Publications Larry Jones; Personnel Ron Moore.
Twenty-five attend the January meeting, where it’s decided to spend $50 to run a com­mercial for S.T.A.R. on KGMC Channel 34 “for the first episode of STAR TREK to be aired on February 1, 1980.”
And at the February meeting, members are naively astounded to realize that the huge $50 fee only paid for one showing of STAR's TV ad! Also by February, Zann Romero has become Zann Jones, the first of many STAR marriages — people who first met at STAR meetings and later wed.
In March, plans are being laid for Ba­belCon 1, to be patterned as a conference of Starfleet diplomats a la the STAR TREK epi­sode “Journey to Babel.”  The Southgate Inn on I-35 is selected.
An April “Current Contacts” list in­cludes 36 people, including later Club Historian Mark Alfred, his first documented contact with S.T.A.R. He is listed as a “guest” at the May meeting.  An April officers’ list includes not only the five mentioned above, but Activities Officer Bob Higgs, Communications Maxine Frantz, and Publicity Andrew Helfer.  One may get the idea of a group of kids making sure there’s an office for every member, but rest as­sured that there are also 28 just plain members.
The agenda for June includes “officer’s terms reduced from 2 yrs to 1 yr” and an outing to see The Empire Strikes Back. June also brings the one-and-only issue of The Trecorder, another unsuccessful run at a S.T.A.R. OKC publication. Its editor, Larry Jones, utters the eternal plea for submissions.  S.T.A.R. now has 30 members, with $3.09 in the Club account, and $81.10 in the separate BabelCon account.
Speaking of which, BabelCon 1 ex­plodes onto the scene July 25-27, 1980.  Russell Bates, author of the STAR TREK animated epi­sode “How Sharper Than a Serpent’s Tooth,” is Guest of Honor.  Bates and other guests Brad Sinor and C.J. Cherryh also speak at the Am­bassador’s Banquet on Saturday night, along with longtime S.T.A.R. Larry Nemecek as Fan Guest. Costumes include Federation diplomats; a TREK TV Romulan; an ambassador in black tie and tails “from Landru’s planet”; S.T.A.R. member Bob Higgs as the Alien from the 1979 film; a tall blonde as the Salt Vampire from “Man Trap;” S.T.A.R. “schismatic” Dawn At­kins in a steel-mesh bikini as a “Fantasy War­rior”; and Mark Alfred in a blue STTMP cos­tume and pointed ears as one of Spock’s rela­tives. Mark makes an impression on the gulli­ble souls around him by not eating meat from the buffet (Vulcans are vegetarians, dontcha know). Such posturing impresses the Guests who, as judges of the Costume Contest, award First Place to Mark as Selik the Vulcan.
A reporter from the Oklahoma City Journal shows up Saturday evening and shoots a group photo of some of the costumed partici­pants and a solo shot of Dawn Atkins and her aluminum bikini.  A full-page spread on Babel-Con 1 appears in the paper’s Sunday, August 3 edition.
From the tiny bits of documentation available from BabelCon 1, it appears that Maxine Frantz was the prime mover and shaker behind the Con. A report from August states that BabelCon 1 has come out $840 ahead, but since it was not a charity convention, the money stays with S.T.A.R.
Our final material from 1980 is from November, when a new constitution is accepted unanimously and officers elected.  Future 1990s Club Historian Mark Alfred has joined in time to be listed as a member at the December meet­ing. S.T.A.R. has a Christmas Party at the apartment of Zann and Larry Jones off Rock-well and Melrose. Mark and Joyce Alfred show up in Santa Suits to much hilarity.
As soon as we figure out a posting problems, we will share some photos of this party.
Posted by Mark Alfred at 12:17 PM No comments: