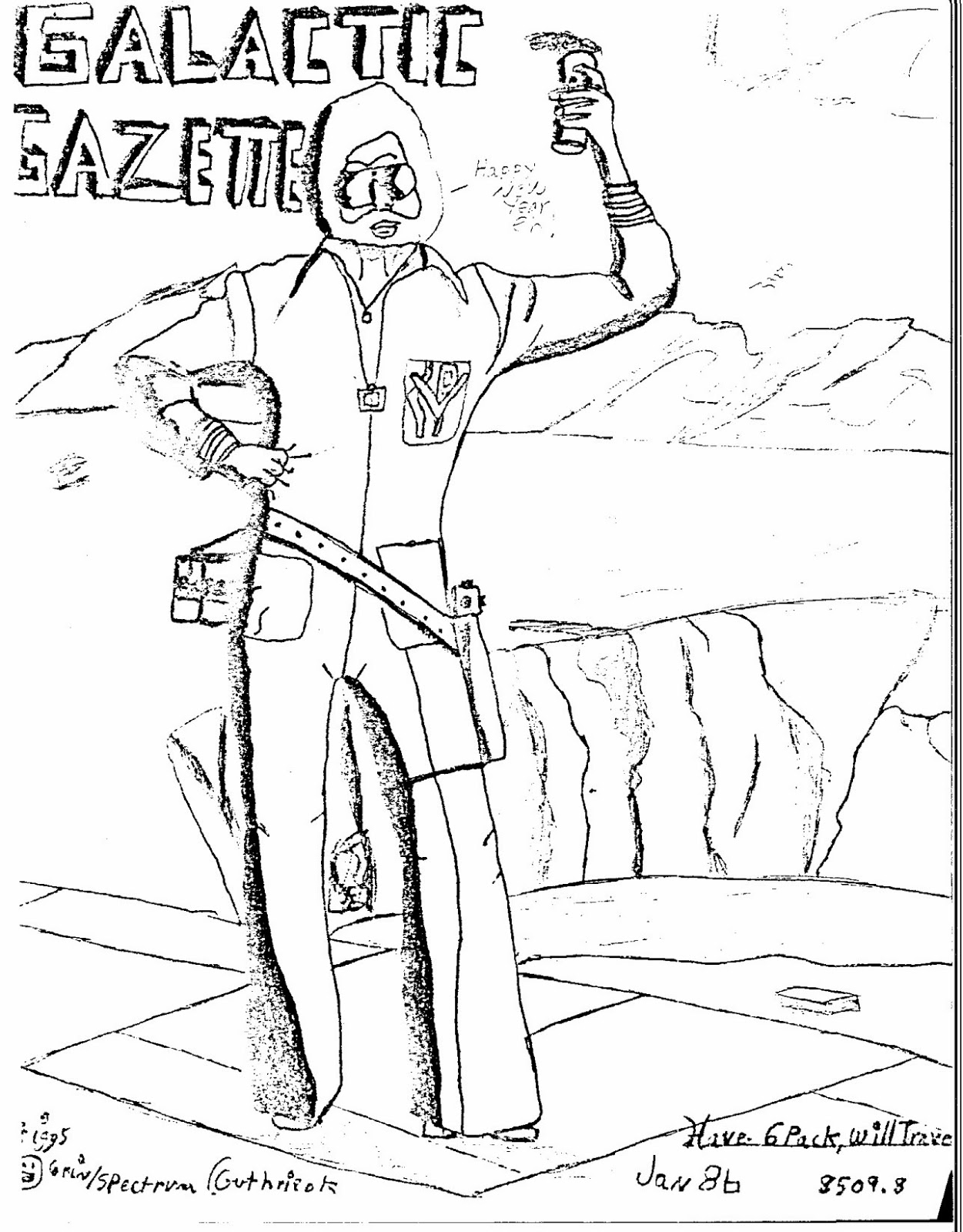 We begin with a cover by Bob Higgs, whose characters always know how to rumble.﻿ 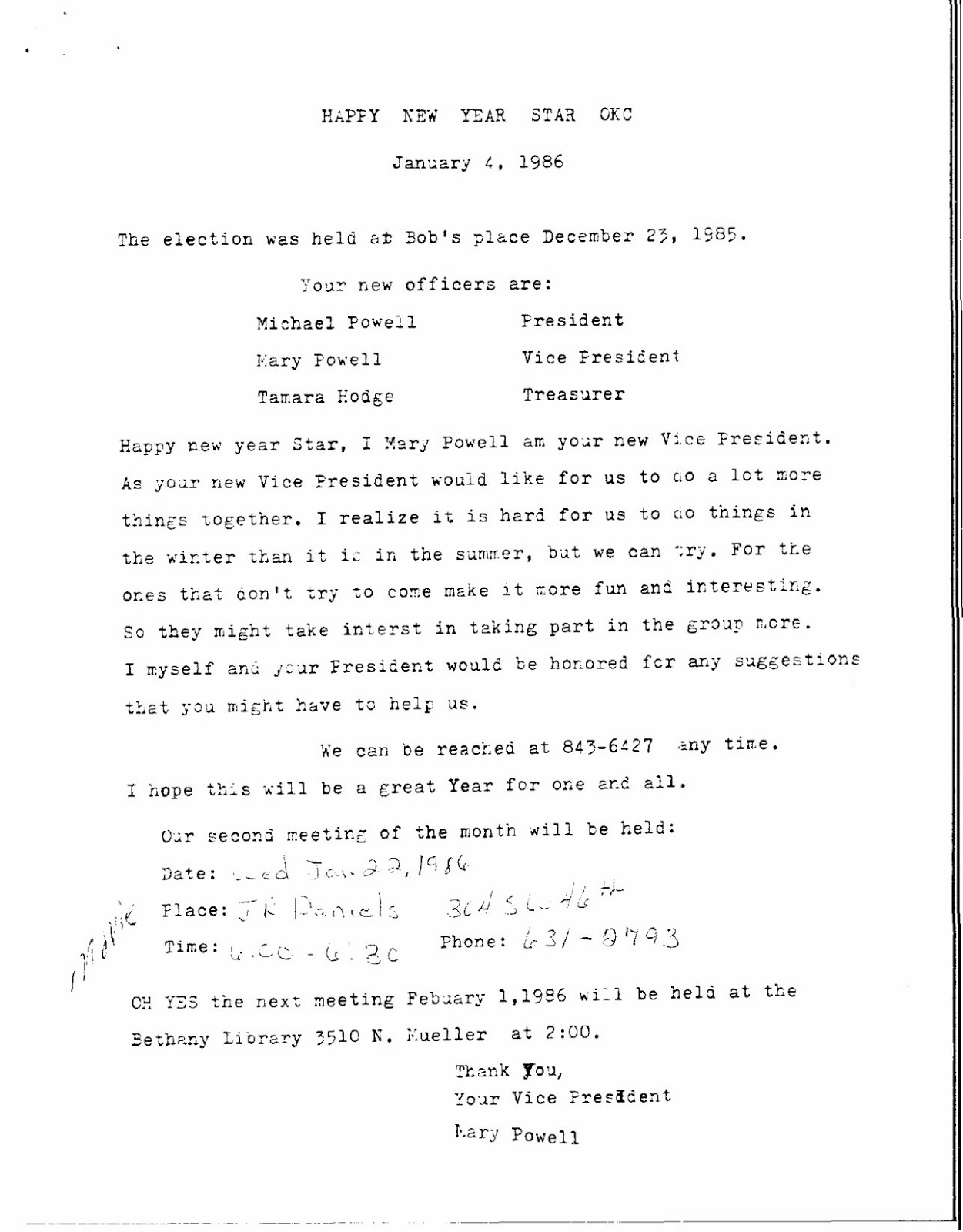 New VP Mary Powell﻿ welcomes us to the New Year.  She's married to the new Prez, Mike Powell.  As you can see by the final line, STAR was meeting at the Bethany Library. 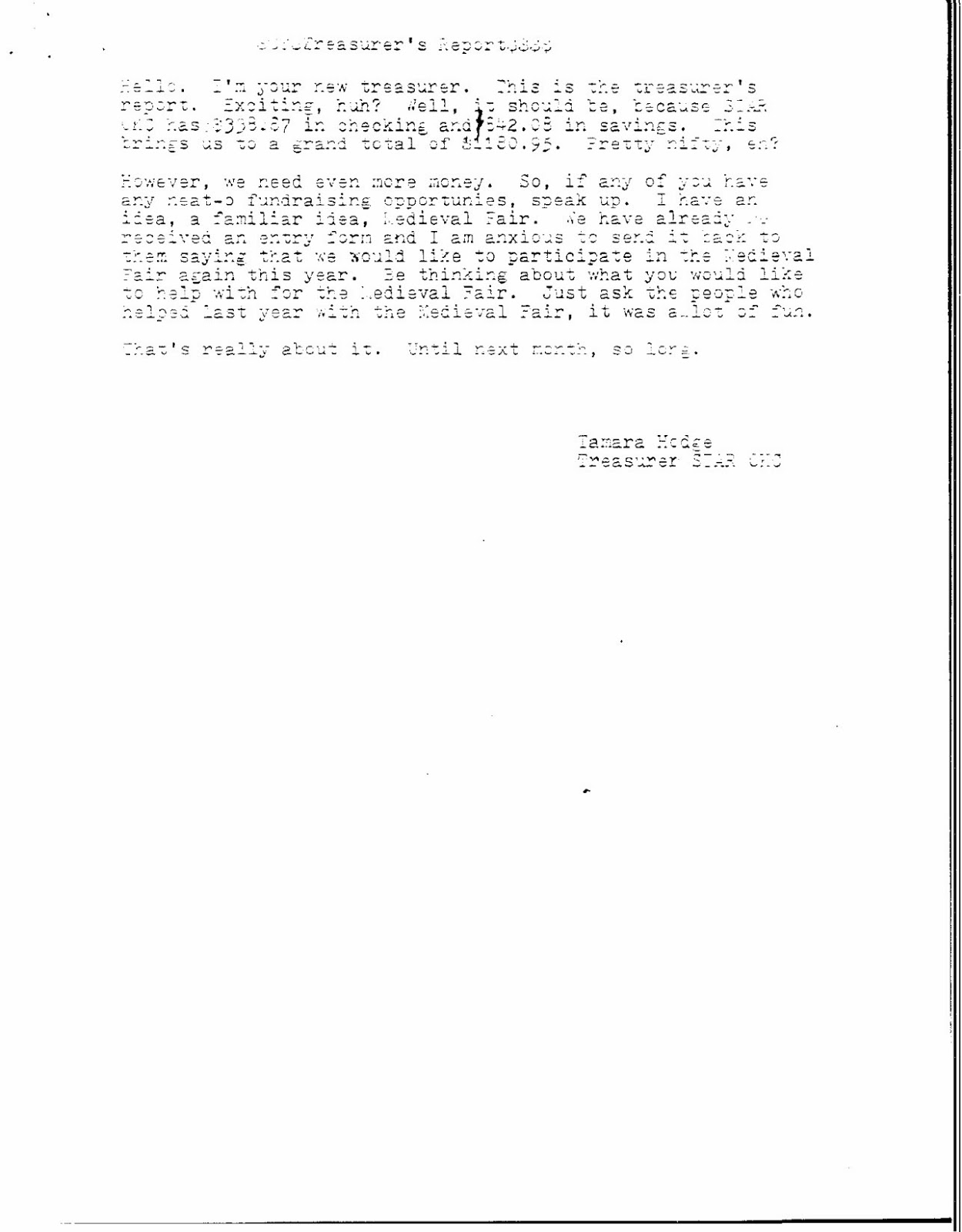 According to Treasurer Tamara Hodge our $1100 needs to be augmented in preparation for SoonerCon 1, which would take place in June.﻿ 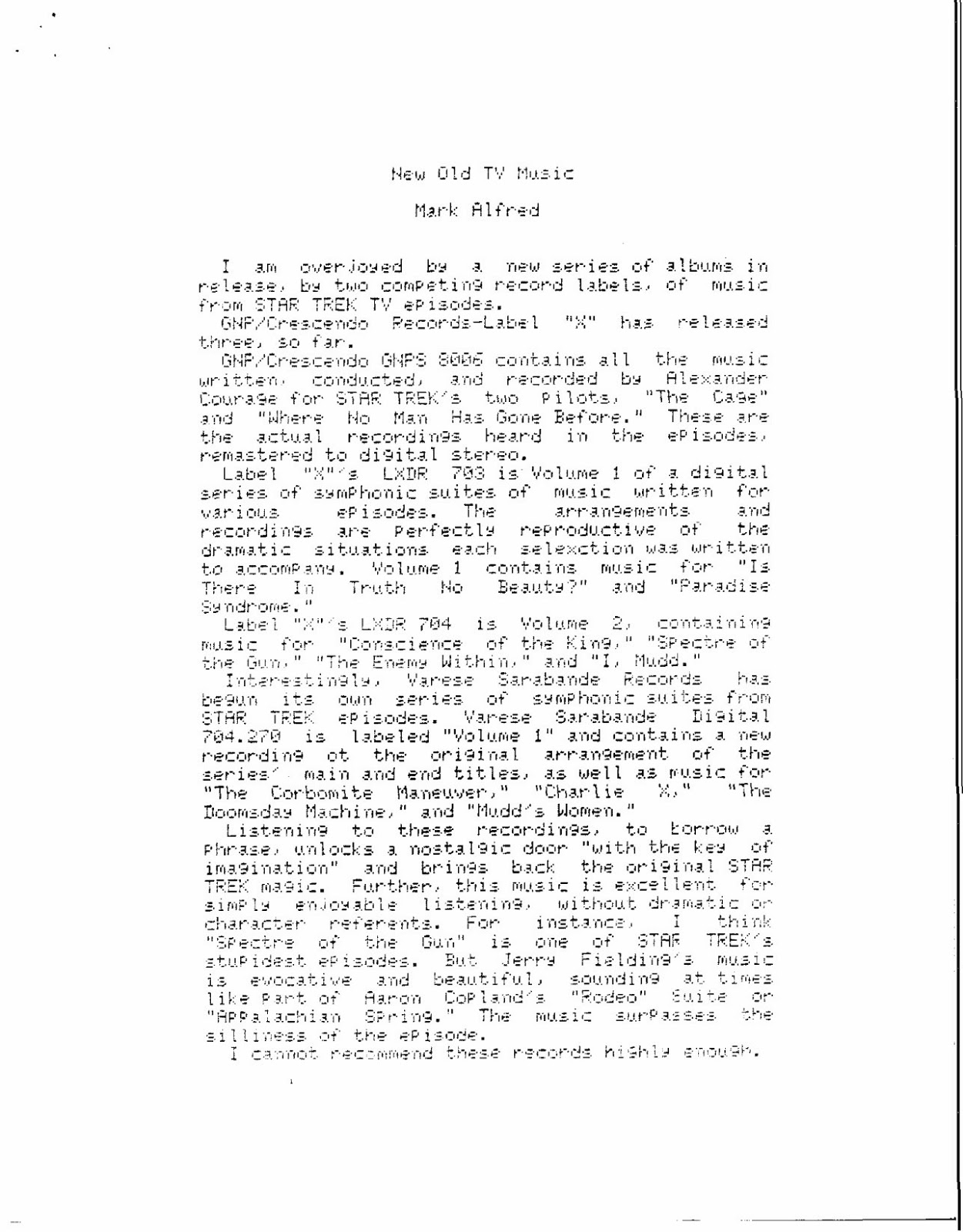 My column is about the GNP/Crescendo/Label "X" releases of Star Trek music.﻿ 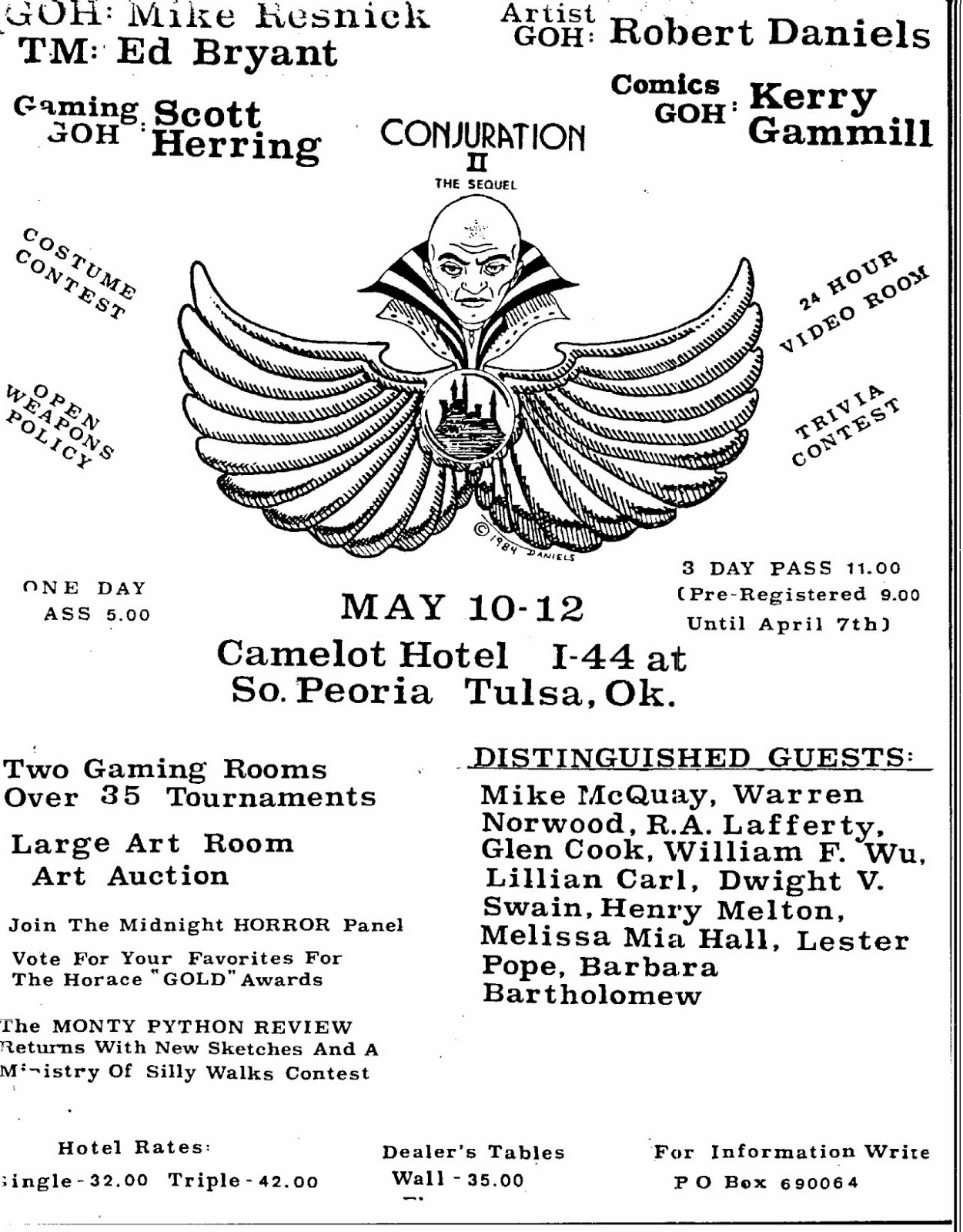 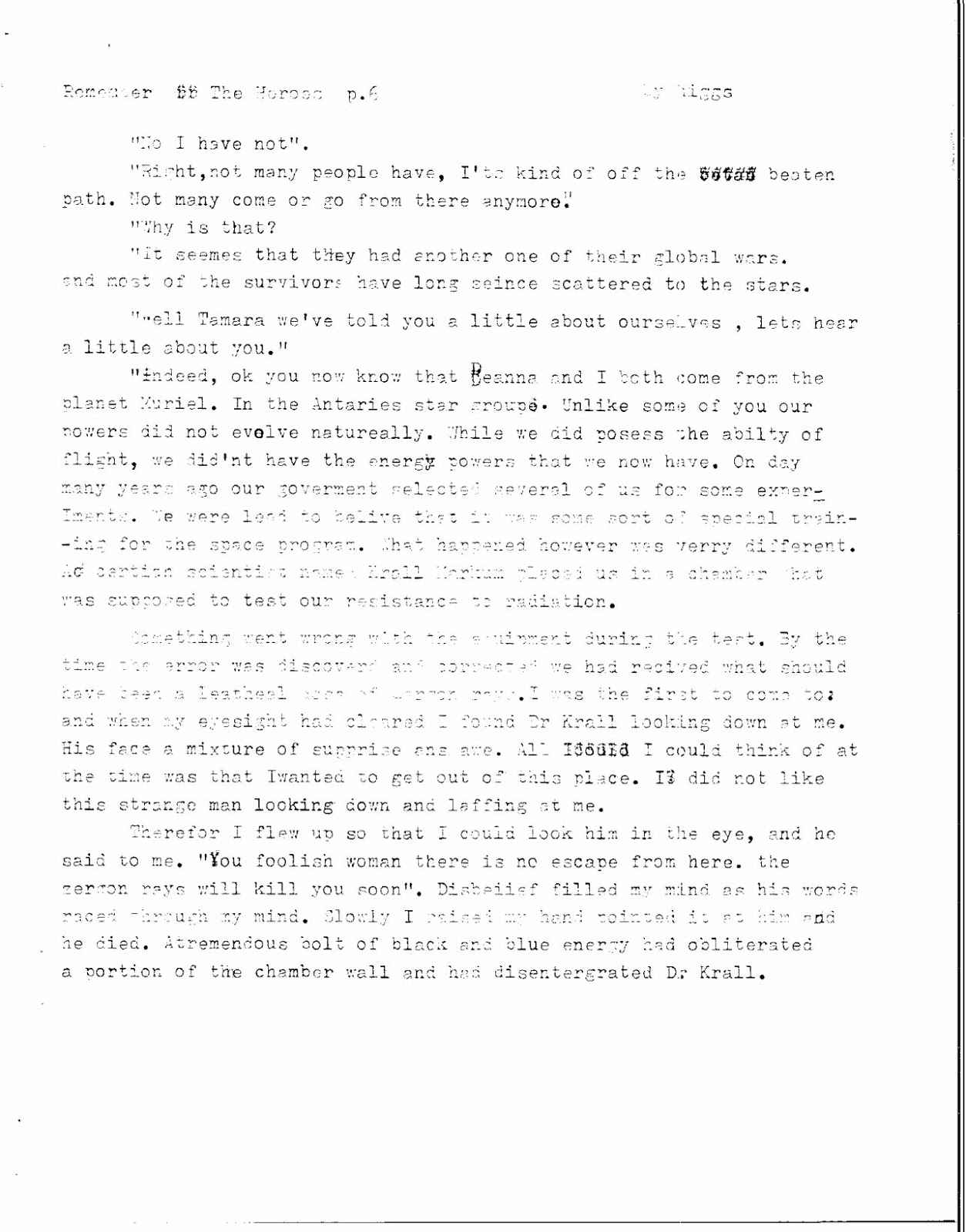 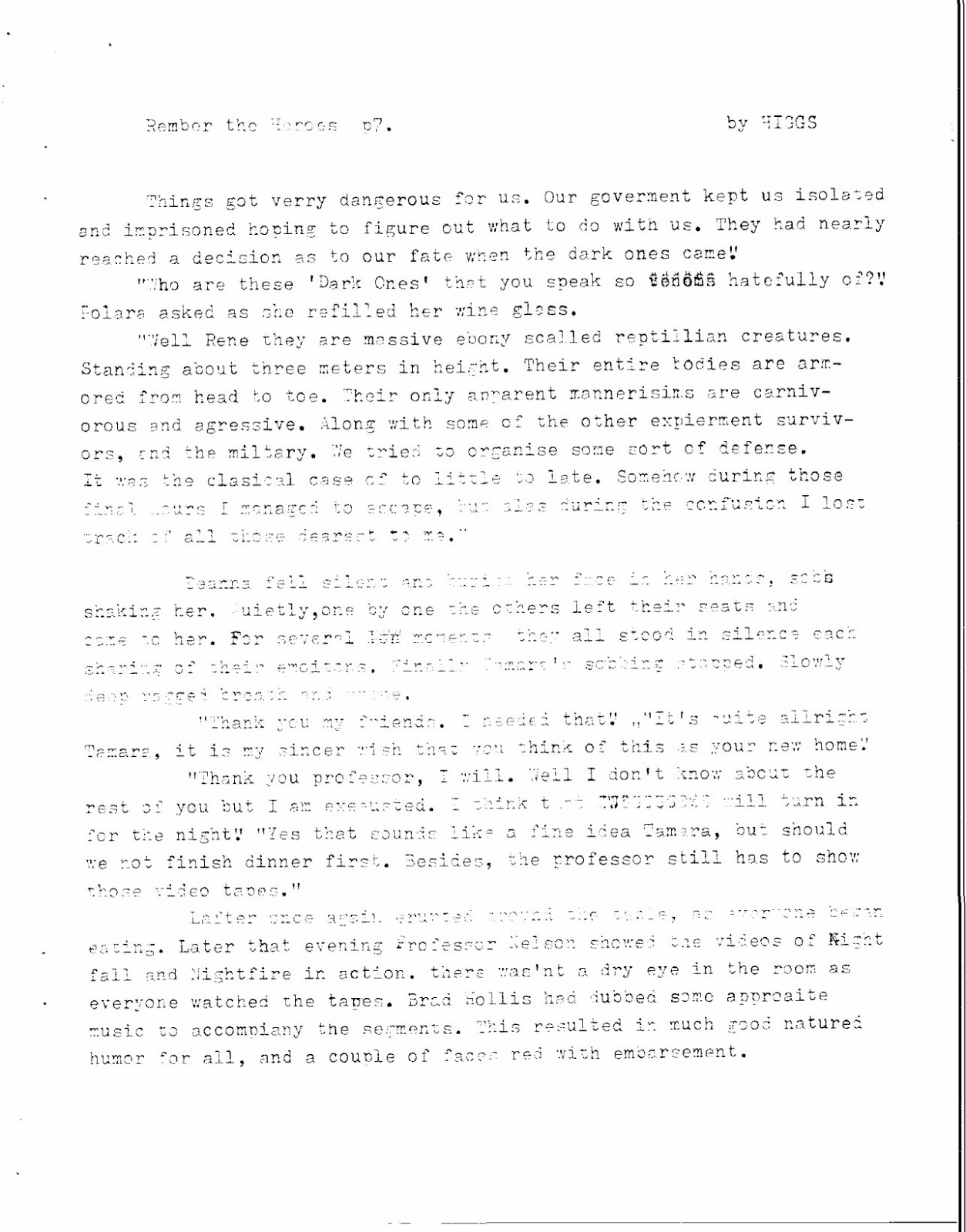 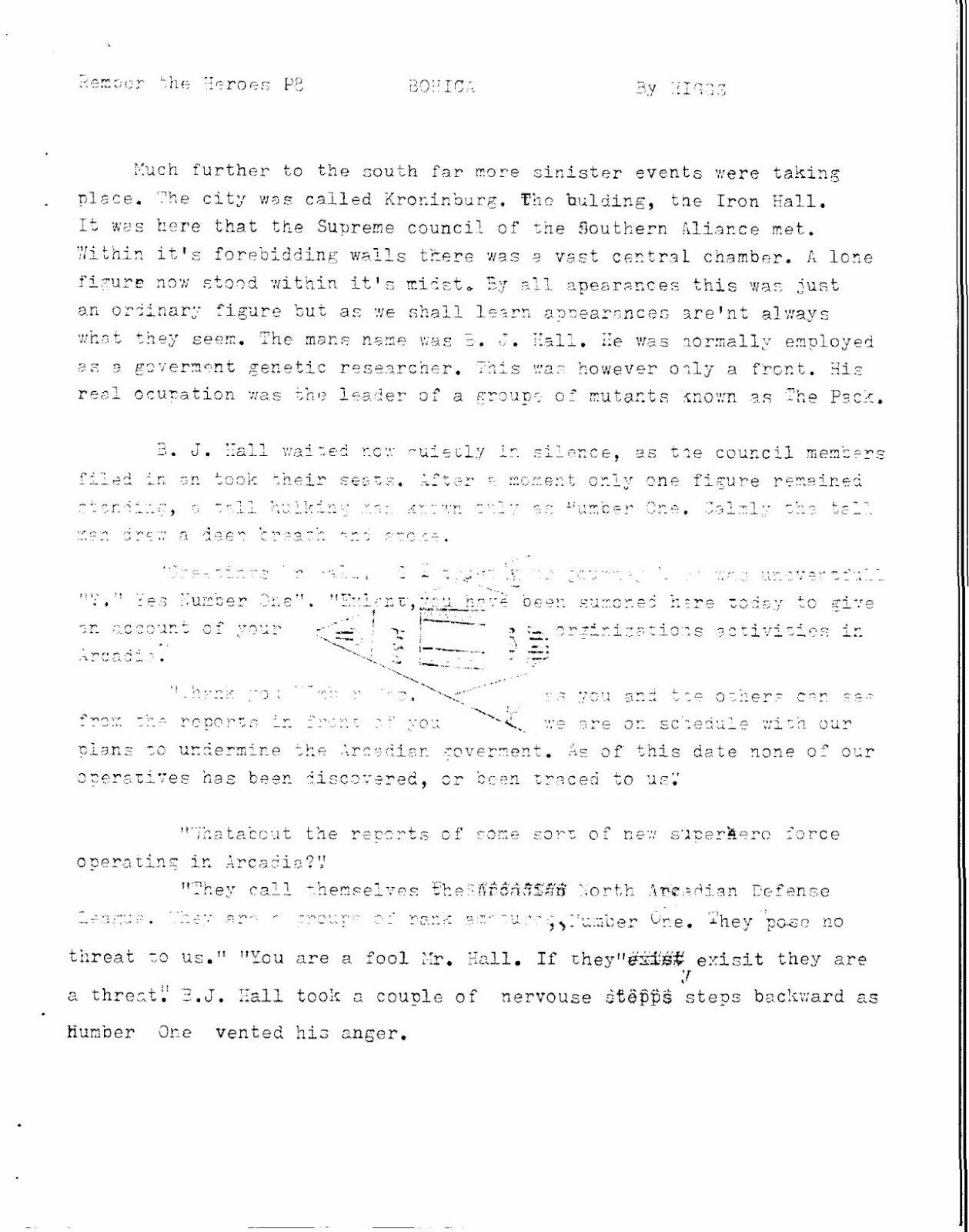 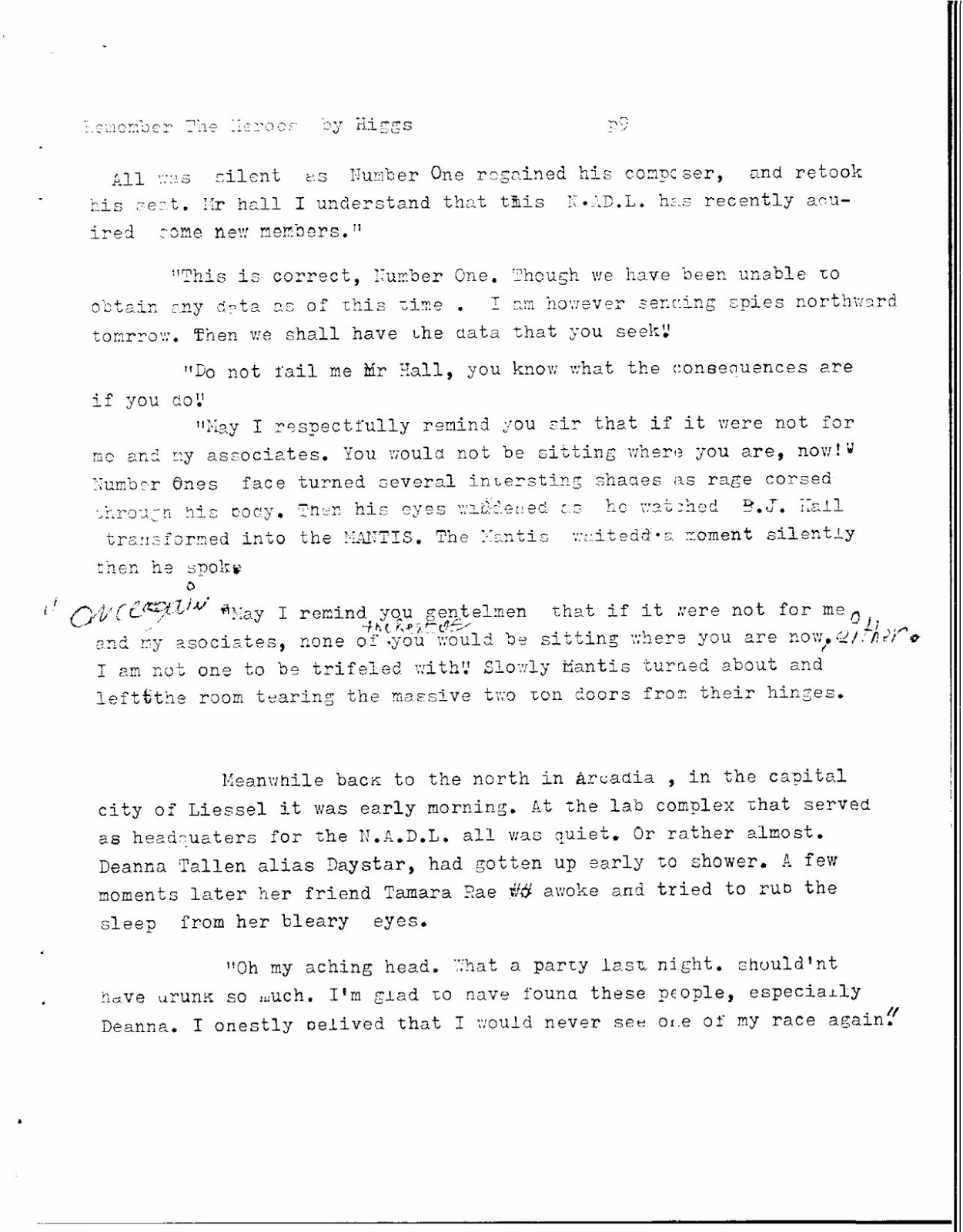 Next we have four pages of Bob Higgs's saga "Remember the Heroes." 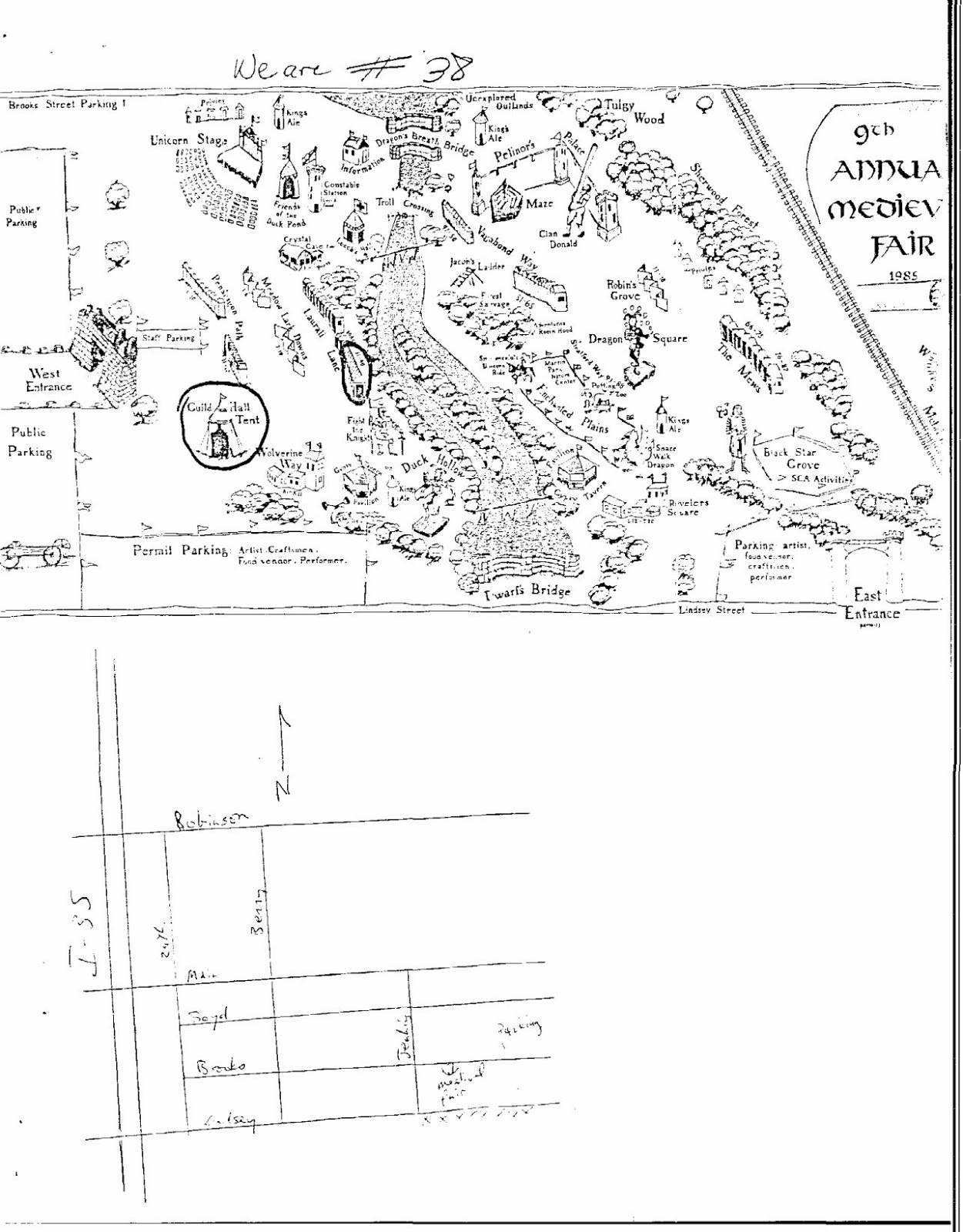 The last page is a map of Norman's MedFair, since we are going to sell things there to raise﻿ money for SoonerCon.
And thus endeth the January 1986 issue of the Galactic Gazette.

Posted by Mark Alfred at 7:28 PM No comments: 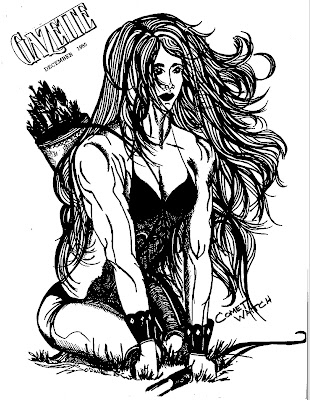 The cover art, appropriately named for the forthcoming December activity, is labeled "Comet Watch."  It is signed "O'Daniel."﻿  The only O'Daniel that I know of in STAR is Gayle O'Daniel, who was also 1985 Treasurer Mike Hodge's mom, who occasionally put up with us at her place for meet-ups.  Gayle was also the "Graphics" person for SoonerCon 2, which was in November 1986. 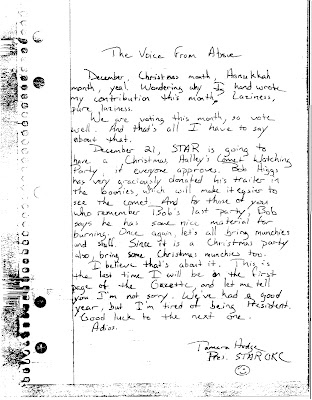 Here is a sign-off as President from Tamara Hodge who is tired.﻿ 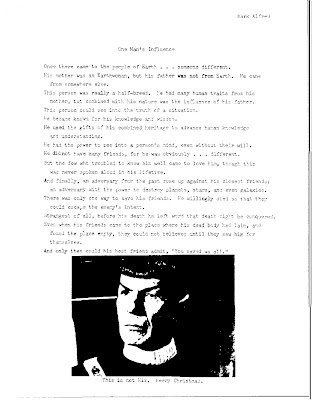 Here is a letter from me about Christmas with a bait-and-switch at the end to try & get people to consider Jesus in a different way.﻿ 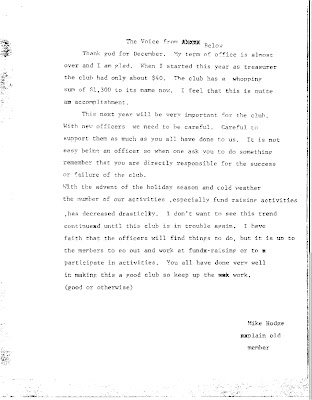 Here is a summation note from outgoing Treasurer, the aforementioned Mike Hodge, who notes that in 1985 STAR went from around $40 in January to $1300 at year's end.  Of course this wad of cash was raised (and augmented in the coming years) ﻿in order to fulfill Mike's vision, explained to me across a table at Hardee's a year or more before this:  "We gotta put on a con."
SoonerCon history began! 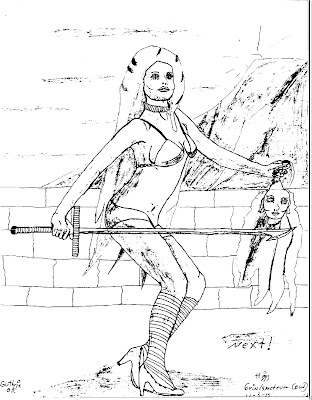 Here is an illo from STAR Bob Higgs, captioned "Next!"  It's typical of Bob's subject matter, sexy gals and violence for interlopers.﻿ 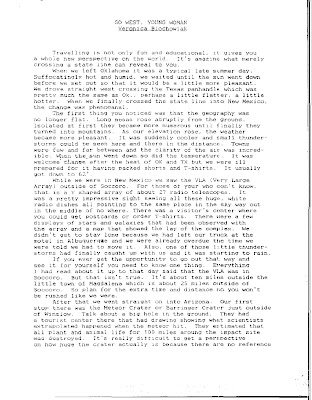 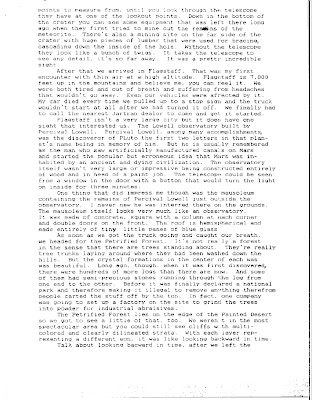 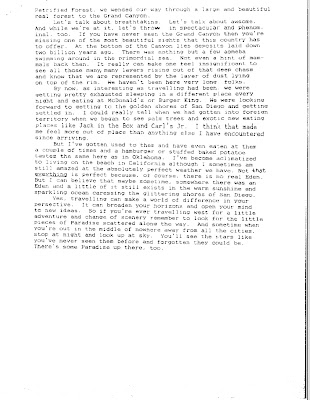 Here we have a reminiscence from Veronica Blochowiak, an ex-STAR who has moved to California.
And that about wrapped up 1985 in STAR!
﻿

Posted by Mark Alfred at 1:58 PM No comments:

This GG is one of my favorites because of Tamara Hodge's cover art, however multi-copied and scan-deresolved it may be. 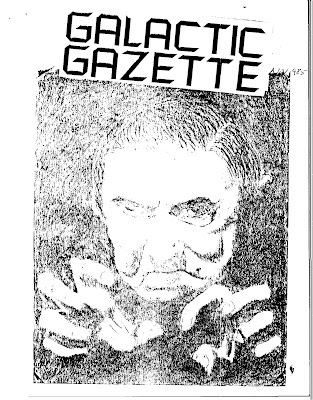 Combine Bela's scritchy-scratchy﻿, creepy-crawly hands with memories of watching Count Floyd (of SCTV fame) and you have yours truly bending over his children and grandchildren, fingers tickling the air, announcing how S-C-A-R-R-R-Y something was going to be. 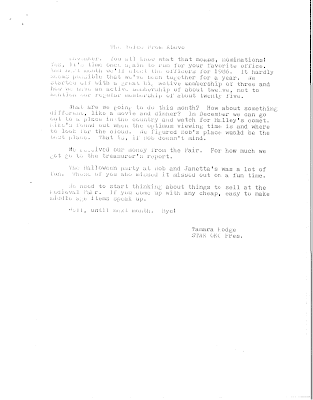 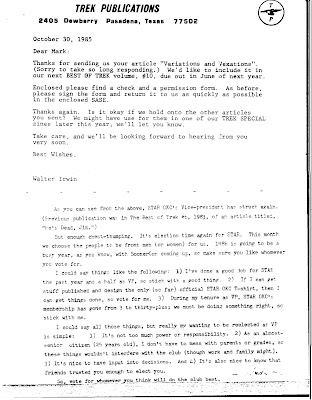 The above page was my proof that I was, by golly, a published author, paid and everything.﻿ 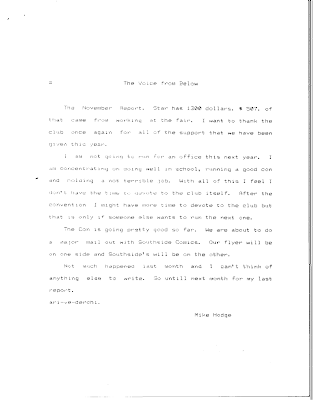 In the Treasurer Report, M Hodge announces that  STAR has﻿, $1300, $507 of which came from working recently at the OK State Fairgrounds.  Other plans include a mail-out with Planet Comics -- that is, a SoonerCon flyer stapled into a flyer sent to members of Planet Comic's mailing list. 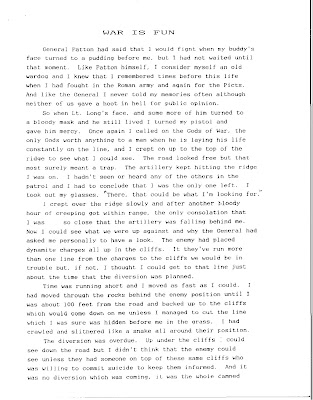 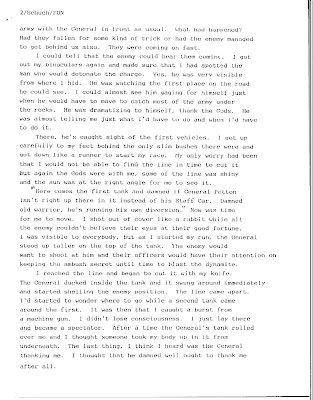 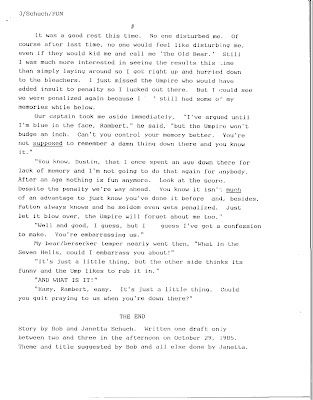 These last three pages are a short tale by STARs Bob & Janetta Schuch.
See you again soon!﻿
Posted by Mark Alfred at 2:10 PM No comments:

On December 12, 1986, STAR members trekked out to Bob Higg's trailer in the middle of nowhere to hold a "Comet Watch" party.
This would have been Halley's Comet, which was pretty disappointing this go-round, looking something like a stretched-out cotton ball viewed from about thirty feet away. 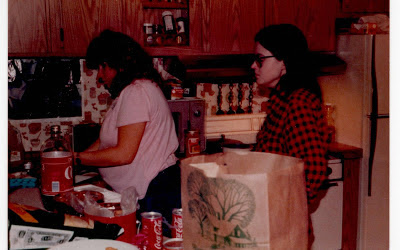 In this photo we have Mary Powell (left) and Tamara﻿ Hodge (right) working on snacks. 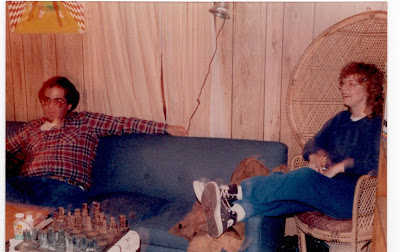 Here we have Mike Powell (left) and a guest whose name is lost to history (right).  For the record, Mike did NOT have a smear of light-colored make-up down the center of his face, this is a camera/film artifact.﻿ 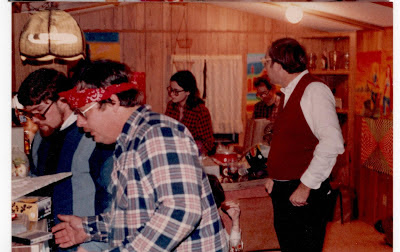 In the above photo, we have Mike Hodge on the extreme left, flanked by our host Bob Higgs (bandana-head).  In the background we have Tamara Hodge again.  In the extreme background we have an unknown person.  In the mid-background, looking towards Tamara, is Bob Schuch in the brown sweater vest.
I don't remember if we saw any comets.  The only thing I remember from that night was the very long and very very bumpy trip between an actual road﻿ and Bob's trailer.  It seemed that we were driving back and forth across the Continental Divide, which had been paved with loose gravel.

Posted by Mark Alfred at 5:56 PM No comments: